Beneath the Stairs
By Jennifer Fawcett
Read by Carolina Hoyos

By Jennifer Fawcett
LIST PRICE $27.00
PRICE MAY VARY BY RETAILER

“An enthralling debut by a gifted storyteller!” —Wendy Walker, author of Don’t Look for Me

In this spine-tingling, atmospheric debut for fans of Jennifer McMahon, Simone St. James, and Chris Bohjalian, a woman returns to her hometown after her childhood friend attempts suicide at a local haunted house—the same place where a traumatic incident shattered their lives twenty years ago.

Few in sleepy Sumner’s Mills have stumbled across the Octagon House hidden deep in the woods. Even fewer are brave enough to trespass. A man had killed his wife and two young daughters there, a shocking, gruesome crime that the sleepy upstate New York town tried to bury. One summer night, an emboldened fourteen-year-old Clare and her best friend, Abby, ventured into the Octagon House. Clare came out, but a piece of Abby never did.

Twenty years later, an adult Clare receives word that Abby has attempted suicide at the Octagon House and now lies in a coma. With little to lose and still grieving after a personal tragedy, Clare returns to her roots to uncover the darkness responsible for Abby’s accident.

An eerie page-turner, Beneath the Stairs is about the trauma that follows us from childhood to adulthood and returning to the beginning to reach the end.

Prologue prologue SPRING
One of the girls found out about the house first. It was always this way; one heard the story and told the others, and so the secret was passed down, girl to girl, generation to generation. She heard her mother talking about it, about something that had happened there before the girl was born, something bad. This secret place still existed, hidden in the woods, waiting to be found again.

And so, one spring afternoon, the girl led her friends around the curve in the road where the field stopped and the woods began. Partway along, she slowed down, searching for the spot where the fence was only hooked over the nails. Easy to pull back; easy to hide. They hid their bikes just inside the woods and followed the old road. Insistent undergrowth pulled at their legs like barbed seaweed, but they kept moving deeper. “Why would you build a house in here?” “Are you sure this is where she said it’d be?” “Maybe it’s gone now.” None of them were willing to say that they wanted to turn around, that as soon as they’d crossed into these trees, they knew this wasn’t a place for them. And then they tumbled into the clearing. And there, alone and asleep, was the Octagon House.

Their feet crunched over decades’ worth of broken beer bottles, leaves, animal droppings, and scattered remains of garbage, all of it turned a uniform shade of dust. The girls shivered and wanted to hug themselves but didn’t. They walked carefully around the two large rooms on the first floor. They glanced up the decayed stairs to the second floor. They looked at the strange door, too large for a regular door and made of metal instead of wood. “It must lead to the basement,” they said. They wiggled the latch, but it was broken, the door firmly shut. The girls were quietly grateful for that. They wandered back into the old kitchen where they had started, kicking at the garbage, wondering what to do next.

But the one who had brought them returned to that metal door. It was once dark green, but rust had spread over most of its surface, slowly gnawing its way through. Nothing stays hidden forever, she thought. And then she remembered how her mother had sounded when she’d talked about this house, that old fear coming awake again. She heard the others and turned to follow them. Just as she did, there was a click, and the door began to slide open. The air that escaped was cold and wet and smelled of earth and rot. Go, she thought, they’re leaving. But her legs wouldn’t move. The door opened farther, and now she could see the top of old wooden stairs.

She wanted to look.

She didn’t want to look.

She dared herself to look.

Only darkness, but there, on the lowest stair: something. She leaned into the doorway and looked down. She took out her phone and shone the light into the darkness, but that only made shadows, so she turned it off again. And in that millisecond, the instant between the light and the dark—

The voice was inside her head, but it wasn’t hers.

Her friends called out to her: “Are you coming?” They were already at the door, stepping out of the grip of the house like it was nothing. She was alone.

Help me leave this place.

She pulled herself away and ran to them.

The girls bolted across the clearing, giddy with adrenaline and release. And as they disappeared into the woods, the door shut. But it would open again. The house was awake now.

She would come back. They always came back. 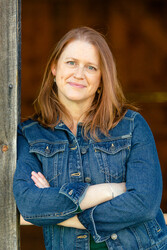 Jennifer Fawcett grew up in rural Eastern Ontario and spent many years in Canada making theatre before coming to the United States. She holds an MFA from the Iowa Playwrights Workshop. Her work has been published in Third Coast Magazine, Reunion: The Dallas Review, Storybrink, and in the anthology Long Story Short. She teaches writing at Skidmore College and lives in upstate New York with her husband and son.

“I binge-watched the Netflix series The Haunting of Hill House. I was soon hungry for a replacement, a novel that would delicately balance bone-chilling terror and deep sadness. Jennifer Fawcett’s debut Beneath the Stairs landed in my inbox at the right moment—and it wasn’t a replacement. It’s undoubtedly unique, an atmospheric and elegantly constructed novel about a woman’s descent into the heartland of mourning and guilt. Blending the best of horror, mystery, and suspense as we move through past and present storylines, this book will haunt you in more ways than one.”

—Loan L., Editor, on Beneath the Stairs

"[Beneath the Stairs] reminds readers how easily a thought becomes a truth, how quickly a dream becomes a nightmare, and how unknowingly we ourselves can become haunted houses. . . . Fawcett’s debut is both incredibly suspenseful and immersive. A word of caution to readers: leave the light on."

“In Beneath the Stairs, Jennifer Fawcett explores the lasting impact of childhood trauma in this metaphysical story about a house with buried secrets. An enthralling debut by a gifted storyteller!”

– Wendy Walker, author of Don't Look for Me and All Is Not Forgotten

“A spell-binding horror story, where the terror comes not from ghosts, but from the haunted places we find within ourselves. A thoroughly engrossing and compulsive read.”

"Jennifer Fawcett's Beneath the Stairs had me from the very first page. Tense, surprising, and utterly gripping, I loved this book!"

"A poignant haunted house tale about guilt, grief, and the nightmares of adolescence that follow us into adulthood. Fawcett delivers genuine scares in this chilling, mesmerizing debut."

– Rachel Harrison, author of The Return

"Are you always on the lookout for a rich, mystery-riddled haunted house novel for grown-ups? Me too. Jennifer Fawcett's Beneath the Stairs is that book. A thrilling, thoughtful, character-driven crucible that reveals the ways childhood fear clings to us, shapes us, but can also show the one way out of our adult darkness."

– Andrew Pyper, author of The Residence and The Demonologist

"Beneath the Stairs is an audacious debut. With plotting as intricate and wild as the Hill House adaptation, it'll keep you guessing until the very end."

"A novel brimming with menace and secrets, a haunting story of friendship and old betrayal that I devoured in one sitting. Fawcett delves into the complicated ties of teen girls against the backdrop of a small town and a strange house’s sinister history. Atmospheric, cleverly constructed—the past meets the present in this gripping debut."

– Karen Brown, author of The Clairvoyants and The Longings of Wayward Girls

By Jennifer Fawcett
LIST PRICE $27.00
PRICE MAY VARY BY RETAILER