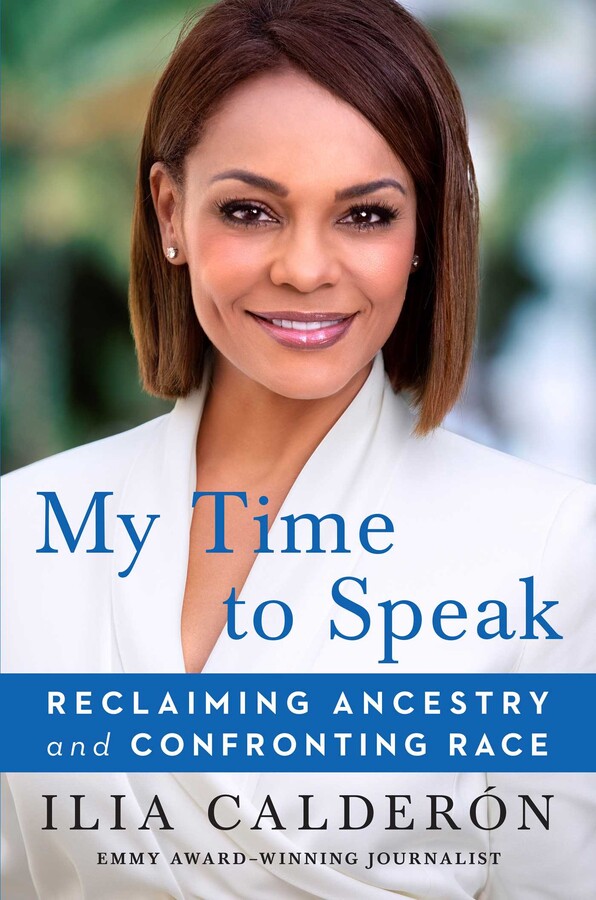 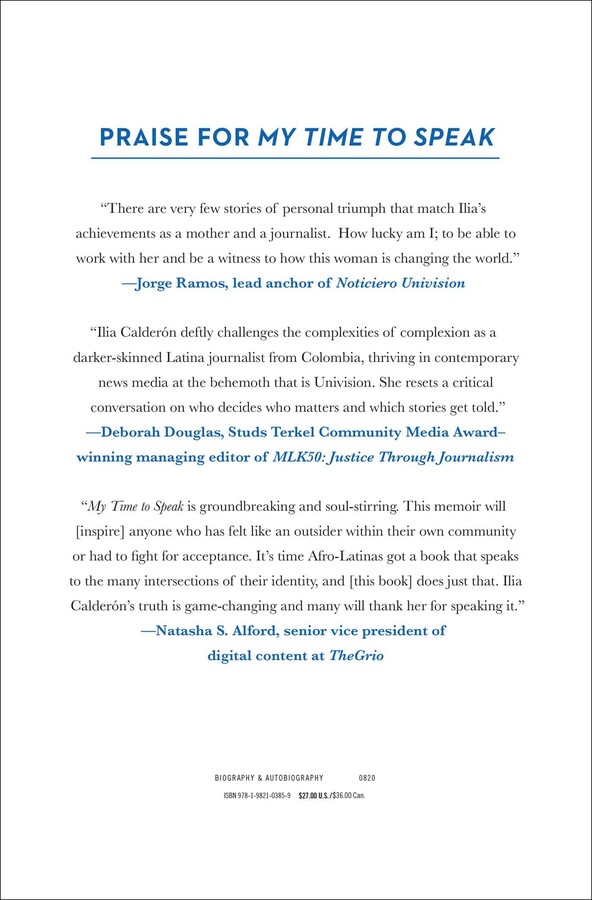 My Time to Speak

By Ilia Calderón
LIST PRICE $27.00
PRICE MAY VARY BY RETAILER

An inspiring, timely, and conversation-starting memoir from the barrier-breaking and Emmy Award–winning journalist Ilia Calderón—the first Afro-Latina to anchor a high-profile newscast for a major Hispanic broadcast network in the United States—about following your dreams, overcoming prejudice, and embracing your identity.

As a child, Ilia Calderón felt like a typical girl from Colombia. In Chocó, the Afro-Latino province where she grew up, your skin could be any shade and you’d still be considered blood. Race was a non-issue, and Ilia didn’t think much about it—until she left her community to attend high school and college in Medellín. For the first time, she became familiar with horrifying racial slurs thrown at her both inside and outside of the classroom.

From that point on, she resolved to become “deaf” to racism, determined to overcome it in every way she could, even when she was told time and time again that prominent castings weren’t “for people like you.” When a twist of fate presented her the opportunity of a lifetime at Telemundo in Miami, she was excited to start a new life, and identity, in the United States, where racial boundaries, she believed, had long since dissolved and equality was the rule.

Instead, in her new life as an American, she faced a new type of racial discrimination, as an immigrant women of color speaking to the increasingly marginalized Latinx community in Spanish.

Now, Ilia draws back the curtain on the ups and downs of her remarkable life and career. From personal inner struggles to professional issues—such as being directly threatened by a Ku Klux Klan member after an interview—she discusses how she built a new identity in the United States in the midst of racially charged violence and political polarization. Along the way, she’ll show how she’s overcome fear and confronted hate head on, and the inspirational philosophy that has always propelled her forward.

Prologue: Eyes of Hate PROLOGUE Eyes of Hate
All my attention was focused on his face. It’s what I remember most clearly more than two years after our encounter. That face that had raged red as soon as he saw me, and continued angry, indignant. His nostrils flared with his agitated breathing, which he unsuccessfully attempted to control. He responded quickly, hot, like a lit fuse, not letting anyone else talk. And then, suddenly, I heard it from his own lips, “We’re going to burn you out.”

We were in the middle of nowhere, in a remote area out in the countryside, and on a stranger’s property. Our cell phones couldn’t get a signal and the sun had begun to drop fast behind the towering trees surrounding us. Trees that seemed to remind us that it wouldn’t be easy to get out of that clearing if our hosts didn’t allow it. The smell of mosquito repellent on my arms fused with the whiskey and cigarettes on his breath as the conversation, at times, became more and more heated.

“Are you going to chase me out of here?” I asked, recalling the torches and the cross on the ground several feet from us.

“No, we’re going to burn you out,” he repeated, without hesitation, not blinking.

“You’re going to burn me out? How are you going to do it?” I said, cutting him off, somewhere between irate and terrified.

“It don’t matter, we killed six million Jews the last time,” he shot back, his gaze defiant as he registered his displeasure with each of my features.

My nose, my lips, my cheekbones, my hair. Although there are a thousand and one bloodlines running through my veins, everything in me screams “black,” and my African roots are undeniable.

There’s no doubt: I, Ilia Calderón Chamat, am black. Colombian, Latina, Hispanic, Afro-Colombian, mixed, and anything else people may want to call me or I choose to call myself, but I’m always black. I may bear Castilian Jewish and Syrian Arab last names, but I’m simply black in the eyes of the world. And he—my angry interlocutor in that remote and desolate place in North Carolina—was Chris Barker, the top leader of the Order of the Loyal White Knights of the Ku Klux Klan, the Imperial Wizard of this new white supremacist branch that had proposed “to turn the United States into a white and Christian nation, founded on the word of God.”

“He’s not saying physically…” his wife said, trying to ease the tension.

“Yes, physically, we are,” he quickly corrected her, then returned his gaze and sharp words toward me. “You’re sitting in my property now.”

Sure enough, I was on his land, surrounded by his people, and engaged in an argument that had gone well past the point of no return. The sun had vanished completely. The night engulfed the space around us. The only lights came from our cameras, aimed at the man icily pronouncing each syllable to say they were “going to burn” me.

I was afraid, I won’t deny it. Afraid like I’ve never been before. Afraid my fate had been sealed. Afraid I wouldn’t see Anna, Gene, my family again. And afraid that so many questions I’d had for so long would remain unanswered.

I should just shut up, not ask him anything else so that his fury doesn’t escalate, I thought for a fraction of a second. Yes, the silence, stealth, mutism that makes us invisible… like we’ve done century after century to survive, a sure bet… Yes, just like I learned as a child, like we were taught at church and in school… to be quiet, to tiptoe… Or not. Maybe I shouldn’t shut up. My head spun at a dizzying speed. Maybe it’s better if I talk back, if I tell him he’s a monster, a madman, that he’s sick, that he’s wrong, and that no one threatens me like that. That I’m a human being like him and he has no right to talk to me in that way.

My mind shut down from so much emotion and confusion as I sat in front of hate personified, at the mercy of the very hate I’d always wanted to look in the eye with the hope of finding answers to the many questions I’d had since I was a child. Why do they reject us? Why does skin color define us? What is the source of such pure hatred? What binds us to other human beings and what is it that keeps us so separate, to the point of such scorn? And, the most pressing question: How had I come to be here, and how was I going to get out of this—remaining quiet, as always, or facing it head-on?

Silence has a price. And, even though I’d ignored it most of my life, silence—like hatred, love, fear, and courage—also has a color. 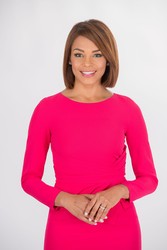 Ilia Calderón is an Emmy Award–winning journalist, the coanchor of Univision’s flagship evening newscast Noticiero Univision, and cohost of Univision’s primetime news magazine Aquí y Ahora. She is the first Afro-Latina to anchor a national weekday evening newscast for a major Hispanic broadcast network in the United States, having previously coanchored three other news desks for Univision and two for Telemundo. She currently resides in Miami, Florida, with her husband and daughter.

“Afro-Latina Univision news anchor Calderón takes on racism in this fascinating memoir . . . Calderón stresses the importance of confronting racism head on, using her platform to report on and expose injustice. [Her] powerful story will resonate with readers.”

“A candid memoir that sends an urgent message.”

“This is a book by an exceptional woman. She does it all. There are very few stories of triumph that even touch what Ilia has achieved as a mother and a journalist. Give her any challenge, and she’ll overcome it. And I have no idea how she does it all with a smile on her face, as if it were nothing. I’m so lucky to work with her and be a witness to the way this woman is changing the world.”

“This is the story of a young girl who grew up in abject poverty, in a wooden house that flooded every time the river overflowed, and yet still worked to become the first Afro-Latina on the most prominent, nightly news broadcast on Spanish-language television in the United States. The lesson that Ilia teaches us here is clear: Anything is possible!”

“Ilia Calderón deftly challenges the complexities of complexion as a darker-skinned Latina journalist from Colombia, thriving in contemporary news media at the behemoth that is Univision. Through her storytelling and confrontation with the realities of politics and culture in the United States, Ilia Calderón shows us how to cover these with context. In doing so, she resets a critical conversation on who decides who matters and which stories get told. Calderón’s intimate personal stories are window to a world we should all look through, understand, and embrace.”

“Ilia Calderón’s life story in My Time to Speak is groundbreaking and soul-stirring. This memoir will be inspiring to anyone who has felt like an outsider within their own community or had to fight for acceptance. Calderón broke down glass ceilings in broadcast television, all while shunning victimhood and unapologetically walking in her truth. It’s time Afro-Latinas got a book that speaks to the many intersections of their identity, and My Time to Speak does just that. Ilia Calderón’s truth is game-changing and many will thank her for speaking it after reading this book.”

My Time to Speak

By Ilia Calderón
LIST PRICE $27.00
PRICE MAY VARY BY RETAILER